Being married to a thrill-seeker sometimes means I’m put in situations that make me uncomfortable; often this infuriates me but every now and then (don’t tell Logan) I wind up doing something I thought I would never do and feeling very chuffed with myself.
I think I’ve mentioned this before but I never used to be a big scaredy-cat – it’s like a few years ago this switch just went off in my brain that told me to be afraid of heights, speed and anything people might consider fun, so now rather than taking risks and being the first person to get out there and do something, I’m constantly alert to danger. Some people might call this “becoming an adult” but it’s pretty frustrating!
Anyway, today we went out to Île aux Cerfs, which is a small island off the east coast of Mauritius. We sailed out on a 35ft catamaran complete with all the food we could possibly eat, plenty of local rum and a bunch of hilarious South Africans (who are an Aussie’s best mate when traveling in Mauritius).
On the way out to the island I was sunning myself at the front of the boat when Logan disappeared for a bit and I figured he was just fetching some beers. Wrong… he was arranging for us to parasail without telling me! Parasailing used to be something I’d wanted to do but lately I’d been way too scared. He had now forced me into it.
We hopped into a small boat and made our way out to the platform in the middle of the sea; Logan got excited while I quietly hyperventilated. Shit-scared, I let them strap me in at the front while Logan sat behind with the ‘controls’. I won’t go into massive detail from here on but I’ll say this: DO IT. It was incredible. Once I was up in the air I calmed down and enjoyed the ride and here is what we saw:

There was no other way to experience this view but by parasail and now I can say I saw it.
The best bit though? When it was over and I was back on the catamaran, I was ready to have one of the best days ever because I was so proud of myself that I felt bulletproof. By the end of the day I’d made friends with everyone and I was even jumping off the boat (haven’t done that in years!) 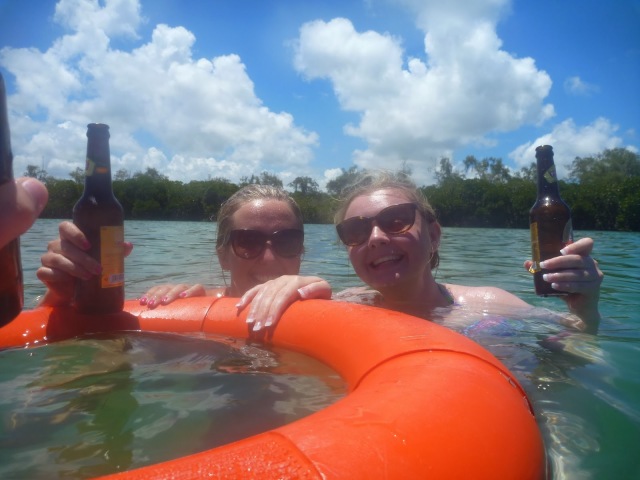