I have a bit of an obsession with gnocchi. It’s the perfect meeting of my two loves: potato and pasta. My waistline wishes my fondness was for protein shakes or celery or whatever but no, its gnocchi, and I’ve been in love with these delightful little dumplings since I was tiny.I always preach about trying new things but when I see these little parcels of heaven on a menu, I can’t resist. I would love to try them everywhere, Sam I Am. I’ve been lucky enough to have gnocchi in Italy (not everywhere but in a few places, such as Venice) and each region of Italy has it’s own interpretation so I’d love to go on a Grand Gnocchi Tour of Italy one day.

The best I’ve ever had though was in Croatia. I actually thought this was bizarre but it’s not; it’s an extremely popular dish in coastal Croatia (such as Split, where I had the best one); they call it “njoki” (sounds the same, I guess). It was in a tiny little port-side cafe where I sampled this best-gnocchi-dish-of-my-life-so-far. So simple, perfect little morsels tossed in a Gorgonzola sauce. I didn’t even like blue cheese at the time, but after this dish I became a convert, which tells you a little something about it’s power.

Anyway, unfortunately I am not currently overseas on gnocchi-consuming adventures. I did however have a lovely weekend in South Australia’s very own McLaren Vale, sampling the local produce (particularly the wine!). I absolutely love living in Adelaide because McLaren Vale, the Barossa Valley, the Clare Valley and the Adelaide Hills region are all so close, and the Coonawarra is a few hours’ drive away. These amazing regions are home to some of the world’s best vineyards and microbreweries and the freshest produce.

We went to a restaurant called Au Pear (so cute, check it out here) and I had, of course, the gnocchi. The menu reads: “house made with confit artichoke hearts, caprino fresco and olive cream”. Now, strictly as a gnocchi traditionalist, it wasn’t what I expected. I have to day though, it was delicious. So delicate, so balanced, so fresh – and just enough on the plate to start feeling full without feeling heavy. Maybe that was the idea – we ordered the lemon souffle for dessert!

So, if you want a relaxing afternoon in the sunshine, head down to the Vale for some beautiful food; if you’re somewhere else in the world right now, keep me up to date with the gnocchi on your plate! 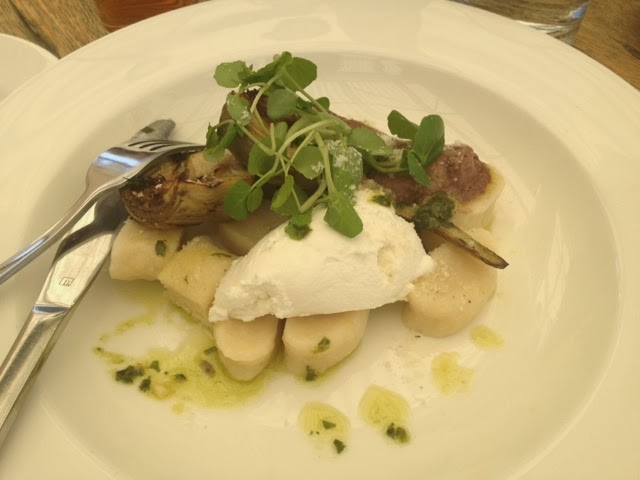 Gnocchi, Au Pear restaurant, McLaren Vale – sorry, I dug in before I remembered to take a photo!
In 2008 (when I was 19) I was lucky enough to visit the beautiful Scottish city of Edinburgh. I had been staying in Paris and travelling around Europe but I was feeling really restless and sick of everything I was doing. In a split-second decision, I booked a train to Edinburgh and checked into a hostel on my own. I’d never done anything like that on my own before, so it was a massive move.

Anyway, for some reason I was trawling through my old myspace the other day (remember those?) and I found a post I’d written while I was there. When reading this, please bear in mind a few things: a) I was 19 and on a bigger adventure than I’d ever had before; b) I had been drinking quite a lot because I’d never had ths kind of freedom before and I probably didn’t quite know how to handle it; and c) I was running very low on internet credit and couldn’t justify another pound to take the time to edit properly, hence the spelling errors.

A quick bit of personal reflection: I look back on this time of my life with nostalgia and a few regrets. I kind of wish I embraced it a bit more and spent more time behaving like this. It was probably the most free and happy I have ever been. I hope one day Fiance and I can do something similar – just drop everything and get on a plane somewhere and figure everything out on the way.

Edinburgh, babyyyy
Current mood: rebellious
have finally found that independent spirit…
a few ups and (break)downs on this trip but finally I’ve found a place where everything just seems right.
Mum, I’m not coming home. and I’m drinking lots of beer and smoking and probably getting a tattoo; it’s all good, classy fun.
No in all seriousness, the feeling of making all my own decisions (however stupid and not-very-well-thought-through they are) is bloody amazing and the idea of going home and back to work and paying bills (that aren’t rediculous hostel nights) is… well I don’t really know the words but I don’t like it. I miss home but this place is just incredible and I’ve barely seen any of it yet. I have absolutely no idea why I like it yet but I just feel so relaxed and at HOME here.
I have no idea where I’m going to sleep tomorrow night!!! Usually that would be the worst thing in the world but right now I just don’t care. I don’t even know if I have the money to PAY for any accomodation tomorrow night but…meh. I’ll get by! Someone here was busking today, I need to discover a hidden talent and exploit it at the train station, perhaps.
Oh, and I love it here so much I’m even in love with the train station and the currency exchange office. Yup, it’s true.
Love to all!

Enjoying a Guinness in the Dunblane pub (we got lost on the way to Stirling)
A few years ago, I hit a point where I had no idea what the hell I was doing. I was too young to really know how to fix the problem, although wisdom is a very subjective thing so even though I would do things differently now, in ten years I will think I was a dumbass back in 2012.
Anyway, I decided the solution was to run away.
Not ‘run away’ in the ten-year-old sense where you run away from home and hide out in the park until dinner time when your mum comes and picks you up, but in the sense that the idea of staying put was so overwhelming, so awful and so depressing that if I didn’t leave I would scream, tear my hair out, and probably die (or some other example of the histrionics nineteen-year-olds are prone to).
Off I went to Europe. Looking back, I like to picture it as something akin to the movie Euro Trip, with Amsterdam hash cookies, pervy Italian men on trains who say “mescuzzi” in sultry tones, and accidentally ending up in Bratislava. It wasn’t like that though. Yes, I learned how to drink beer, took up smoking like all the sophisticated European girls do, and salsa-danced with a bunch of soldiers in a nightclub in Budapest, but it was more a journey of growth than a “can’t-remember-half-of-it Contiki tour” (not that I am opposed to these in ANY way).  There were tears for sure and I learned some pretty hard lessons about people, but I also learned about my own strength which had, until that point, eluded me somewhat. I did things I would never have done before that, I went out on my own and made things work, I made friends and I lost friends, and I stood up for myself when I needed to. I guess it was my own personal form of rebellion.
As with all my travel so far, I learned a lot about myself. Seeing other cultures in action often gives you a reference point for your own life and I think travel gives you the opportunity to develop as a person. It is rare that I would go somewhere without having this in mind.
I don’t run anymore. Not everything in life is peachy but I have it pretty good now. And I know that most things can be fixed one way or another with the three Hs: Hard work, Humility and Humour.
By the way I don’t smoke any more – it was a short lived phase. Health over cool factor and whatnot. I do, however, enjoy a nice beer… But the only bloke I would salsa with is Boyfriend (and that is a big ask!)

catacombs, paris… chillin’ with the dead
Seven reasons I wish I was in Europe right now:
1. My BFF lives in London
I keep forgetting this fact. I bought a new car a little while ago and went to cruise round to her house, then realized she doesn’t live there any more. I went shopping with Boyfriend and he just didn’t help (bless him). I just want to rock Oxford Street with my bestie.
2.  Edinburgh Fringe Festival
My favourite city. My favourite festival. The world needs a laugh and Edinburgh is the perfect spot to have it delivered. This place serves to remind you not to take life too seriously.
3. Summer Solstice
Because I’m just desperate for sunshine!
4. The weather
See above my friends! It’s freezing today and when I look out of my office window it feels like night time.
5.  Tour de France
I love the atmosphere of Paris at any time, and I love the French countryside ten times more. I love the Tour Down Under and am so lucky to live in the beautiful South Australia, but combining the Tour with the lovely France is just a winner.
6. Euro 2012
There’s nothing like a bit of European rivalry and football brings out the best of it. I love the passion a football match invokes in the crowd and I could use the excitement right about now!
7. The food
I’m on a diet. It’s no fun. I’m trying to look good for a black-tie ball this weekend but I’d rather be sitting at a café in Santorini or Venice eating and drinking the day away. It’s my favourite part of traveling.