Air Mauritius, we need to talk. About us. I think we need to take some time apart. It’s not you, it’s me… Actually, who am I kidding? It’s you.
You reeled me in so easily. You seduced me with your cheap fares, glamorous destinations, sweet-talking cabin crew, French champagne and fine dining. I was in love. The kind of love you shout from the rooftops and post all over Facebook and Twitter. Then you left me stranded for three days and you broke my heart (and make me look like a fool).
You promised so much but as our relationship went on, you stopped caring. You made promises you never planned to keep, took advantage of me financially and when I tried to fix things you gave me the cold shoulder. All the while you kept giving me just enough hope to keep believing in you.
The sad thing is that even now, when I’m sitting here thinking about you, writing you a letter trying to recoup the thousands of dollars I’m out of pocket because you gave up on me when I needed you most – I’m still a fool for you and I would probably do it all again. Sigh. 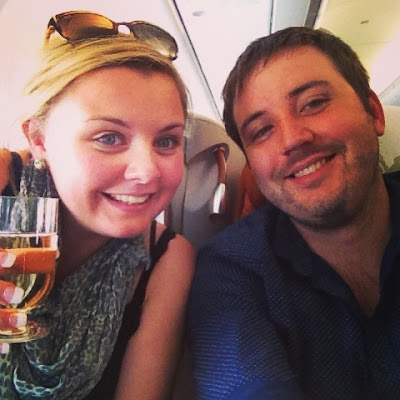 Business Class on the Air Mauritius A340 from Perth… beore the cyclone, the four day delay, and the re-route via Hong Kong. A happier time.
The first time I ever went overseas (to Vietnam) everyone was so eager to give me advice. It frustrated me that everyone thought they were a bloody expert when the only slice of wisdom they ever gave me was “don’t drink the water!” It wore thin pretty fast.
…Until now.
I can now say that, however inadvertently, I drank the water and MY GOD I have never been that sick in my life.
Off we went on our glorious honeymoon. It was meant to be three weeks of romantic newlywed bliss, just the two of us. Just us – no intestinal parasites invited, thank you very much.
Six days in, a lovely Giardia infection changed all that. In case you’re not familiar with it, Giardia is a protozoan parasite that infects the small intestine and, without getting too gory, can make you really ill. For me personally, it was the secondary symptoms that were the worst – the violent shaking, the sensation of chinese burns all over my skin and the stomach twisting cramps made the other obvious symptoms look like a cakewalk.
I fell ill on 21st December and it’s now the 18thJanuary; after some heavy duty meds, I can finally say I’m feeling much better, although I still have to take the medication for a while longer. I had to go back to work this week and let’s face it, I really could have used a stiff drink each day when I got home but alas, my liver is shot and I’m not allowed to drink.
The moral of my story is this: when travelling frequently, it’s easy to become complacent. It’s easy to dismiss advice because we are now the experts. Even though I was careful, this has been a big wake-up call for me – I might be reasonably well travelled but when it comes to world domination, the bugs win hands down.
Be careful folks. When people tell you not to drink the damn water, they really just have your best interests at heart.

Ugh, it’s resolutions time. I have some I would like to make, but I also have some bigger ideas that I thought were worth sharing too. Maybe rather than make specific resolutions I probably won’t keep, I should make broader observations about how I can improve my life and focus on them instead. For example, last year I told myself I was a hard person to be friends with and that I should make attempts to be more social and it worked! As opposed to the one where I was meant to cook one new meal per week… yeah, that definitely didn’t happen. Nor did I stop biting my nails or cease online shopping.

It doesn’t have to be concrete but it does have to be a vague idea of what I want, where I’m heading and how I’m going to get there. I’m good at the detailed “five-year plan” but I’m not good at sticking to it as I have a short attention span.

As above, I need to be more driven and not throw in the towel at the first sign of difficulty. Which leads to…

I was watching a TED Talk by Angela Lee Duckworth about students’ learning styles and how measures of IQ, backgrounds etc don’t have that much bearing on a kids success, but rather their stamina and attitude determines whether or not they graduate. I realised this is true, and can be applied to everyone, not just youngsters. I am guilty of wasting intelligence and talent because I don’t see things through and I don’t seem to have the stamina to follow something to completion when the goal is too long-term.

This is a gradual one; I see improvement has been made but I’d like to step it up a notch. I’m notorious for ignoring bad things, hoping they’ll go away… Newsflash: they don’t. They get worse.

Work exhausts me because I’m constantly problem-solving and having to practice my ‘lateral thinking’. It’s a great challenge, but sometimes we need other challenges to ward off the otherwise inevitable insanity that comes with such jobs. So, I’m considering taking up French again, or maybe some other class once or twice a week. Which brings me to…

I know, boring. But this year I’m not going to get all funny about my weight and fitness. This year, I’d like to embrace some activities that are fun bit that just happen to get me moving. Sticking with volleyball will be good but also perhaps adding ballet or another form of dance… Just a new outlet that will keep me occupied and be a nice stress release.